On UK shores for the first time, visual and sound artist Ross Manning is an illustrious figure in the Australian art world whose background in improvised music and noise has led him to create kinetic sound sculptures which function as automaton prose. In an exciting new collaboration the meeting of London based sound stalwarts Dan Hayhurst (Sculpture) and Graham Dunning promises an onslaught of deteriorated beats and hissing analogue machines. Expanded cinema and sound artist Sally Golding presents shifting hallucinogenic sonified light fields, and UK electronic music producer Spatial fills in the cracks providing noisy and dancey DJ delights. 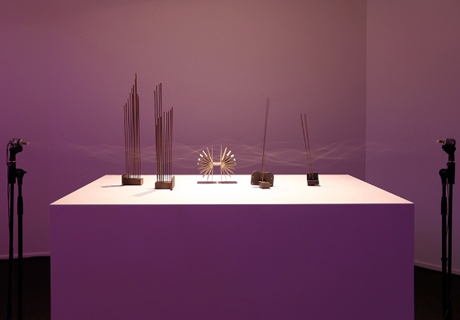 “Manning’s work threatens to lift the veil from the fetishised consumer electronics on which we are dependent, subtly repositioning the technologies that operate as the unseen ‘given’ in our daily lives. In place of the corporate software-hardware standards that are now so normative as to be effectively coercive, we are presented with a quiet unworking – an alternative emotion of objects. What is highlighted, throughout Manning’s work, is the ongoing, unresolved question about the dynamics of power between technology and contemporary life.” – Danni Zuvela (Milani Gallery exhibition catalogue, 2012) 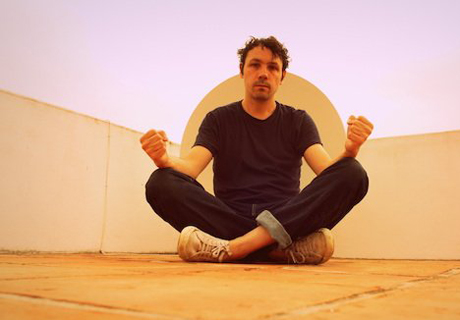 Collaborating for the first time Dan Hayhurst (Sculpture) and Graham Dunning perform sonic kinetics in a duo of distorted beats mixed through an impasto of hissing audible detritus.

“Like hayhurst’s Sculpture productions, Critter Party is tuneful, fizzing and popping with hooks but also entirely untuneful and unpop in the way that it forgets itself, and forgets to built and repeat. Instead its melodic ideas run, trickle, eddy and form torrents” – Sam Davies (The Wire, September 2016, issue 391) 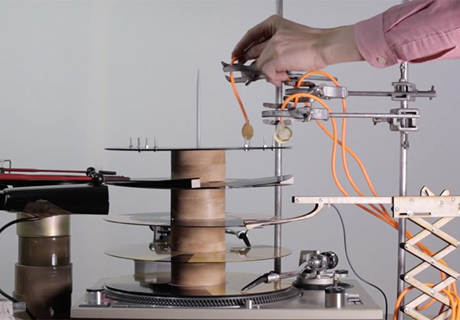 “Over the past seven years, Graham Dunning has been steadily redefining the record deck as instrument. In an age that sees club DJs rely increasingly on USB and sophisticated mixing software, Dunning’s practice is rooted firmly in the material heft of platter, cartridge and vinyl disc” – Robert Barry (The Wire, July 2016, issue 389) 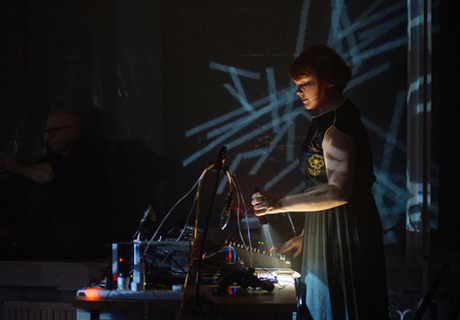 Sally Golding is a multimedia artist combining film projection, lighting and sonic composition to create expanded cinema performances and participatory installations. Golding’s audiovisual performance work focuses on the experience of the audience, pushing the boundaries of visual and auditory perception through the breakdown of the cinematic system into flicker, waveforms and colour fields; while her installations have harnessed the presence of the audience themselves by incorporating their reflected image into projections within immersive spaces.

Known internationally for her expanded cinema performances, Golding’s live sets are edgy and intense, driven by a minimalist approach to horror aesthetics leading her to explore science and superstition, philosophy and pulp. Her sonic work revolves around a custom system of printing complex optical sound compositions onto 16mm film, and performing with light sensitive audio devices and amplified lighting. Cacophonic in form and content, Golding’s performances transcend chaos and enter a hypnotic zone, while her installation work evokes acts of self-perceiving leading to meditative and transgressive states.

Through the curatorial outlets of Unconscious Archives (London) and OtherFilm (Australia), Golding presents live audiovisual and sound art performance as a means of examining: ‘liveness’; the synaesthetic concerns of audiovisual art; and the contemporary role of the audience.

“The British born, London based Australian artist has created dozens of installations and performances in recent years, stradling lines between expanded cinema and sound art. She ceremonially piles dizzying sensations onto audiences, from the trembling light of multiple projectors to the serrated noise pulsations of the scores”. – Tristan Bath (The Wire, June 2016, issue 388) 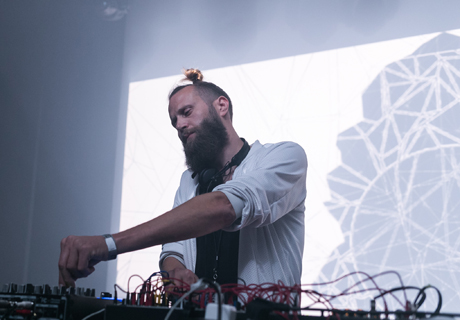 London electronic music producer and low-end provocateur Spatial (aka Matt Spendlove) weaves together a mix of dubbed-out techno and rave experiments, alongside fanciful noise in his dj sets which offer both creative musings and dancey moments. In his own live sets and recordings Spatial approaches low frequency vibrations with a minimalist’s scalpel, carving out space for snare grooves and tech house glitches. First emerging in 2008 as part of the UK’s nebulous post-dubstep brew, Spatial has a long history of making music that’s difficult to classify. Subverting established genre formulas and standard drum patterns, his dancefloor experiments pull from dubstep, garage, techno and vintage rave, ultimately sounding like none of them. The most adventurous Spatial creations have always surfaced via his own Infrasonics label, including the four-part 10” series that kicked off his career in 2008, and Emergence, his more recent triptych of nuanced EPs. Spatial has released on labels including Ultramajic, Well Rounded, WNCL and Niche N Bump. Spatial has created radio and live mixes for Red Bull Music Academy, Solid Steel, Secret 13, FACT Mag and Unsound.

“Matt Spendlove’s forward-thinking bass mutations have been mangling our brains since way back in 2008, and now he returns with the third part of his excellent Emergence series of EPs.” – FACT Mag (2016)