Taking place in the glorious ballroom of the venue Vooruit, UA is ecstatic to present Spanish expanded cinema artist Esperanza Collado, and Berlin based film-sound duo OJOBOCA in a special event to mark Art Cinema OFFoff’s Spectral Presence – Expanded Cinema From Britain and Beyond.

With thanks to curators Godart Bakeries and Julian Ross. 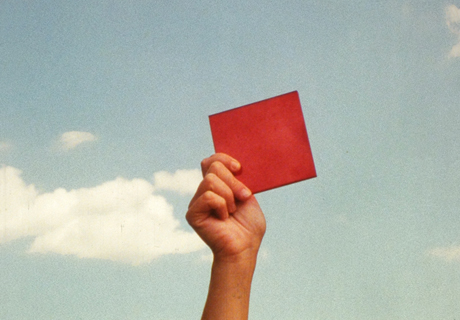 Esperanza Collado is an artist-researcher who focuses on the relationships between visual arts, performing arts and cinema. Her performances move across sculpture, architecture, filmmaking, and choreography to explore the experience of montage, time, and presence within the space of projection. Her book Paracinema: La Desmaterializacion del Cine en las Practicas Artisticas (‘Writings on Art’ Prize, Fundación Arte y Derecho, Madrid, 2012) investigates cinema’s intrinsic properties and their possible expressions in non-filmic works. Collado is also a co-founder of the Experimental Film Club, Dublin, and of LEVE, an artistic association that releases annually site-specific field-recordings made by invited artists. We Only Guarantee the Dinosaurs has been described as a “carefully-constructed choreography, guiding a series of objects through an earnest investigation of the essence of CINEMA (Past, Present, Post) and its possibilities. The future of a thriving film art relies upon efforts like this.” – Jodie Mack, Filmmaker
Esperanza Collado

WE ONLY GUARANTEE THE DINOSAURS
16mm films, red carpet, torch, palm tree, variable measure of ribbon, raincoat, kettle, cardboard box, dry ice, feathers| 2014
“From a territory inherited from the confluence of cinema, sculpture, and dance, the conditions for the enunciation of the filmic image are transformed. Cinema’s luminous resonance occupies a space and has the potentiality of turning it into a tactile, magnetic, and gaseous geometry from which projecting does not simply consist of creating optical and magnified images through a film and onto a screen. To project also relates to thought processes and bodily actions.” – Dominique Païni (Should We Put an End to Projection? 2004, MIT Press) 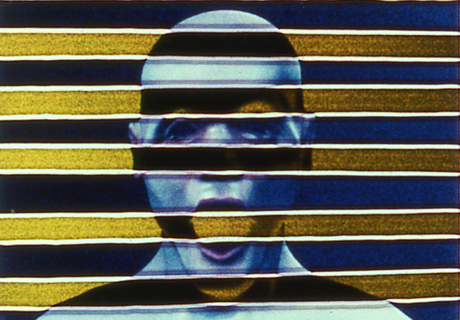 Anja Dornieden and Juan David González Monroy are filmmakers living and working in Berlin. As OJOBOCA they practice Horrorism, a simulated method of inner and outer transformation. Their work encompasses films, performances, installations and workshops. They have presented their work internationally in a wide variety of venues to a wide variety of audiences. Since 2010 they are members of the artist-run film lab LaborBerlin.

HORRORISM FOR BEGINNERS, BEGINNERS FOR HORRORISM: OJOBOCA offers its introductory film massage. With our purpose-made device our trained film masseuses will help you release your other self. Working directly on the invisible flesh, in four distinct movements, the sickness of light will be revealed. A word of caution: This is a device that does not release pressure…
Read more – OJOBOCA

NOW I WANT TO LAUGH
2 × 16mm projectors | 15 min | 2014
This is a simulation of a prototype for a “feeling machine” envisioned by Dr. D. Forme in 1917. This simulation is based on a short description and diagram found in the doctor’s notebooks. The description focuses on only one section of the machine. Brief mentions of the other sections were included but no detailed information was discovered. The machine was never built, yet according to the description its purpose was “to replace the faulty mechanism of human emotion”.

A HOME INSIDE
Live audiovisual presentation, 3 × 16mm projectors | 20 min | 2013
Now you can protect precious lives with this blast resistant home installed permanently inside your body. Here is a home with all the advantages of any concrete home plus protection from the outer agents of disorder, imbalance and instability. You know no disorder can be cured without being brought to a crisis. Together with the action of the dream fluid, we will create a representation of the crisis that will dissolve the obstructions that prevent proper circulation and re-establish harmony and equilibrium in every part of your inner home.