This special edition brings expanded cinema crashing down on London with the first visits in this capital from the dynamic French collective Nominoë, and from innovative live film artist and author Sami Van Ingen. Also featuring the premiere of new audiovisual synaesthetic work by London’s Spatial.
▁▁▁▁▁▁▁▁▁▁▁▁▁▁▁▁▁▁▁▁▁▁▁▁▁▁▁▁▁▁▁▁▁▁▁▁▁ 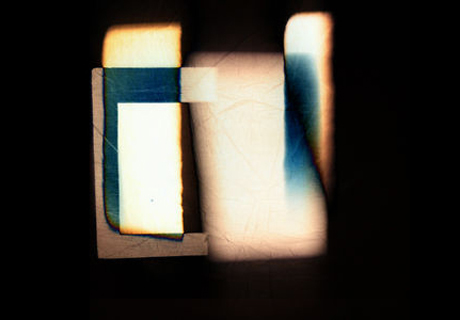 Cinema moves away from the usual model of film production – images are made without a camera; filming disappears in favour of the actual act of projecting. Their performances focus on collective visual and sonic improvisation – the ‘shape’ of the work remains free, the projectionist is turned performer.

Handheld projectors and other devices emit discontinuous light destructively fed through rotating color disks and filters, the beams finding their way around mechanical interruptions. Sounds captured by microphones are processed and redistributed live, creating an audible and visual machine in motion, accelerating and gradually thrashing out to a self destructive final explosion. 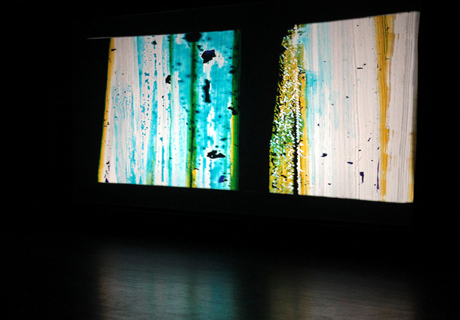 “If cinema has its own language, and if we accept that cinema can also be abstract, then this language must be somewhere other than in depiction.” – Van Ingen

Utilising two modified 35mm film projectors, clear and opaque film, and bottles of ink, flickering light, colors and textures are created in real-time, by applying liquid pigments straight onto the film base – whilst it moves through the projectors. The images are created by scraping, coloring and dissolving the film surface just before the looped filmstrip feeds back into the projector. The filmic image is in a process of constant change and partial destruction.

‘Primaries’ allows the audience to see the process of creation – the physical act of manipulation. There is no final, fixed work, rather the process of image creation in full display, an ephemeral cinematic experience never to be repeated.
Sami Van Ingen

SAMI VAN INGEN WILL BE JOINED BY PETER MARSH 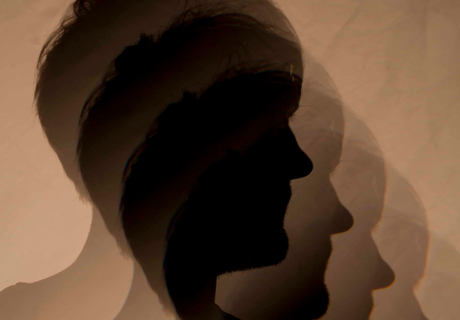 ‘Primitives’ is a new performance project from Spatial that uses custom made, home coded software to explore sonic and optical intensity articulated by simple geometric figures and high and low frequencies. Projected images drive a sensory assault, consumed by your eyes, then your ears and existing somewhere between perceptions.

In sympathy with the material aspects of live audiovisual art, Spatial’s method of deformation and alteration of coded light brings a new realisation to the relationships between seeing sound and hearing colour.

Spatial is most often referenced for his “echoes of haunted dancehalls and distant raves in London town..” In late 2008 spatial subverted the UK bass scene by releasing a limited 10” on his newly christened infrasonics imprint. The expansion of dubstep’s horizon with a technoid garage hybrid combined with the minimal aesthetic of the design and information reticence proved compelling in an age of categorisation and communication overload. The release scored an instant Boomkat single of the week and all but sold out inside two weeks. Spatial’s new EP is currently hotly recommended by Bleep. This is Spatial’s latest project interrogating hacked code for excruciating light.
Spatial