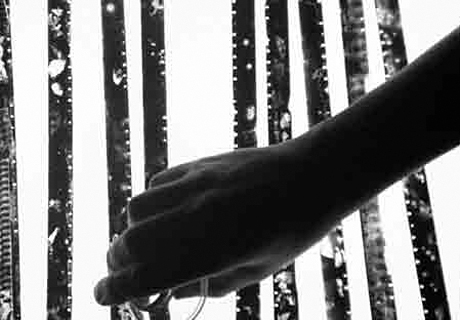 Inspired both by the work and thought of 1940s marine scientist Ed Ricketts and the technical approach of french filmmaker Jean Painleve in the same era, INTERTIDAL presents a submersive exploration of the tidal zones and marine life off the shores of Western Canada. Using both camera and non-camera approaches, this performance-based work presented on two analytic 16mm projectors speaks to the fragility of both the film medium and the marine environment explored. The scope and materiality of both emulsion and environment are explored using elements as wide ranging as photograms, alternative film chemistry, live manipulation, and the very movement of the tides themselves. At once personal, political, visual and ecological, the work gives equal weight to representation and abstraction. A project of process through exploration, INTERTIDAL is a marine ecology for emulsion: teeming and tenuous, fleeting and alive.
Alex MacKenzie 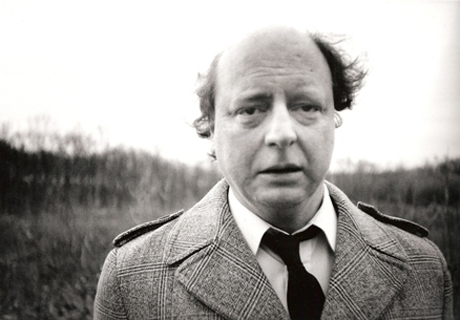 Adam Bohman is one of the stalwarts of the British improv music scene, tirelessly reinventing aural intricacies from dismantled kitchen appliances and finding new applications for recently raided objects from the garden shed. A renowned character on the scene, filmmaker Peter Stickland couldn’t resist inviting him and his brother Jonathan to appear in the recent film sensation Berberian Sound Studios (also releasing Bohman Brothers on his label Peripheral Conserve). A founding member of Morphogenesis, an essential part of the Bohman Brothers and a staple of the London Improvisers Orchestra, Adam is a forcefield of absurd intent, gruesome deluge and unanticipated neurological perception. Recently he performed at the BBC Proms John Cage Centenary Celebration, Royal Albert Hall. Adam brings prepared strings, objects, text and voice to UA#7.
Adam Bohman – YouTube
Bohman Brothers 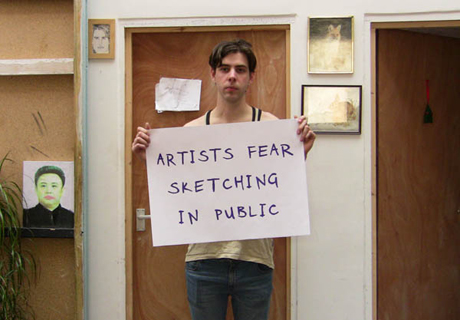 Scourti works with video, drawing and text often placing herself or those around her into the frame, creating idiosyncratic works reflexive of the impression subversive and overt media messages have on our everyday lives. Her work addresses the mediation of personal and collective experience through language and technology in the net-worked regime of contemporary culture. She has screened internationally at museums like the Museo Reine Sofia, Kunstmuseum Bonn and Jeu de Paume Museum, as well as festivals such as the Recontres Internationales, interfilm Berlin, ZEBRA Film Festival, Antimatter, Impakt, MediaArt Friesland, 700IS as well as extensively in the UK, where she won Best Video at Radical Reels Film Competition; recent screenings include Video Salon Art Prize, Exeter Phoenix, Bureau Gallery, Tyneside Cinema and Sheffield Fringe Festival.

Woman Nature Alone (10min, 2010)
Each of the videos in Woman Nature Alone record performances of titles and descriptions of stock video and photography that correspond to the words ‘woman’, ‘nature’ and ‘alone’, employing the text as if it was an instruction.

The individual videos, hosted as a playlist on the artist’s YouTube channel, create a second-order stock library for others to use. This version, for single channel screening, employs formal repetition to create a rough day to night narrative.

Artists Fear (9min, 2012)
Posters emblazoned with a range of artists’ fears are held up by the artist’s friends, family, acquaintances and housemates as well as random passers-by in a variety of public and private locations in London. Despite the handwritten aesthetic and seemingly heartfelt opinions expressed, the texts are headlines collected from the internet which begin with the phrase ‘artists fear’ and utilise a digital version of the artists’ handwriting as font.
Erica Scourti