//The Wire, Off the Page festival//

The Bleeping Light represents an array of contemporary film, video, live audiovisual and sound artists who delve into cracked phenomenal and psychological perceptions, synaesthetic slippage and hacked technologies to produce works which inhabit a space between waveform and frame.

Appropriated for single channel presentation many of these works exist in an environment which challenges the flat confines of the screen, and have their origins and inspirations in sound art and performance. From this perspective springs a narrowing of apparatus and bodily intervention – a disavowal for projection-beam-screen-emulsion/pixel-frame/scan line – and an affirmation of electrical-chemical nervous systems. This is cinema which speaks directly to the viewer’s synapses, and which seeks to reorganise these ‘printed signals’ into energy-sound-light-colour-form.

Included are audiovisual works by sound artists who explore the role of a ‘seeing ear’, and sonic explorations by filmmakers who by the act of performance and intervention derive a sonorous space. These experimental film works locate a ‘liveness’ in close quarters with sound art in performance and arrive at trance like state of neural reflux.

Curated by Sally Golding (OtherFilm / Unconscious Archives) for The Wire, Off The Page, 2014. 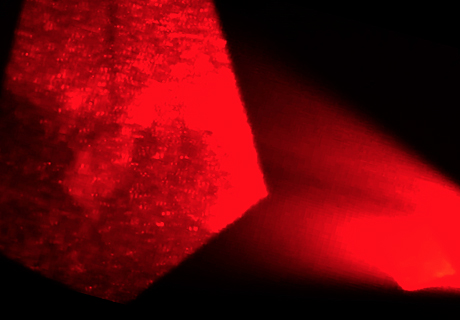 Primitives is a performance based opti-sonic installation from Spatial (Matt Spendlove) that uses custom made, home coded software to explore sonic and optical intensity articulated by simple geometric figures and extreme frequencies. Projected images drive a sensory assault, consumed by your eyes, then ears, and existing somewhere between perceptions. In sympathy with the material aspects of live audiovisual art, Spatial’s method of deformation and alteration of coded light brings a new realisation to the relationships between seeing sound and hearing colour. Hacked Light is a reconfiguration of Primitives – projected live using smoke and a convex mirror in 3D space and refilmed for the screen. Primitives is released on vinyl and DVD by the Broken20 label. 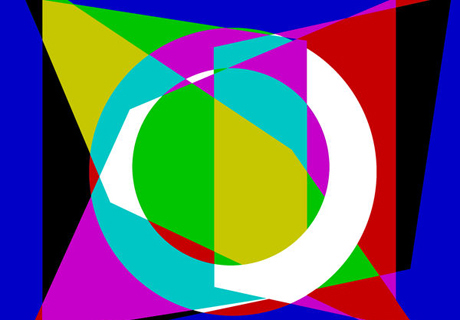 Simon Payne’s works are an intense and dynamic exploration of colour mixing, phasing tone rows, and illusions of movement. In Vice Verse Et Cetera ten variations of four transitions transform the screen from one field of clashing complementary colours to another, via radiating, sweeping and twisting graphic dividing lines. The course of these transitions is interrupted from the offset and becomes increasingly frenetic, especially as the spectrum turns to black and white. 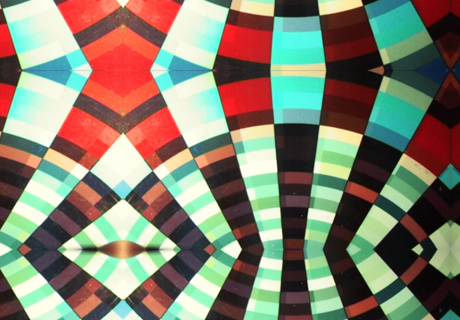 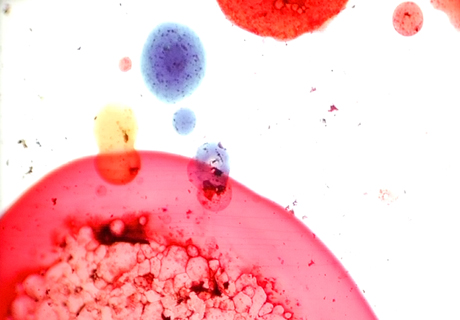 Vicky Smith creates works which she describes as ‘Full Body Film’. “Smith uses bodily fluids such as spit and tears as the material basis for the film’s imagery, interspersed with animated scratches on the surface of the celluloid. Smith invites an almost clinical engagement with these internal fluids. Enlarged on the screen, they resemble scientific microscopic images that bring us into an uncanny physical proximity with the artist’s body. The choice of material support – clear leader rather than negative stock – bestows on the film an ethereal quality that elicits both fascination and discomfort.” – Kim Knowles. The soundtrack is a hissing, ‘licking’, of the optical soundtrack as the fluids crossover and are read by the sound head. 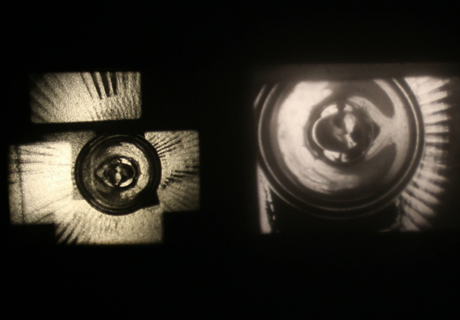 Stephen Cornford is a sound and media artist creating sonic performances and installations. The subject of this double 16mm projection is the mechanics and optics of the projector itself. Filmed during a Sound and Music funded residency within the film laboratory at no.w.here film lab, the work searches for an optical form of feedback, closing the distance between camera and projector by pointing their lenses at one another. Through this self-reflexive relationship, the opto-mechanical apparatus of cinema becomes visible: the bulb, framed in the gate, is caused to flicker by the interaction of the two shutters. In performance the projector (re)produces its own image on the screen in front of us, the gaze of the audience is met only by the gaze of the machine looking back at them. 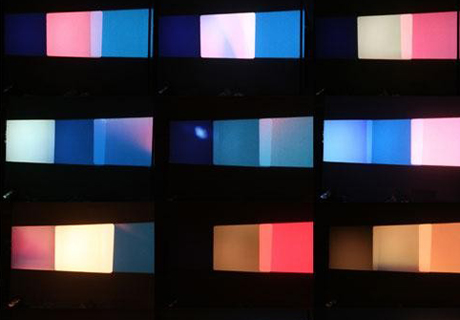 Lynn Loo’s live film performance work is a shifting, subtly flickering meld of colour and form – translucent shifting light beams amplified by photoresistors and optical sound. In End Rolls, which has been transposed for the screen, raw colour film was partially exposed intermittently to different levels of light such as candle, stove, fire and room light. An idea partly derived from seeing the beginnings and endings of the effect of light leak on colour film – a soft, inappropriate licking of light revealing the photochemical medium usually reserved for the capture of representational images. Originally shown as three 16mm film projections with real time intervention via the use of focus and framing, and with live sound extracted from the light of the projectors using photo-resistors. 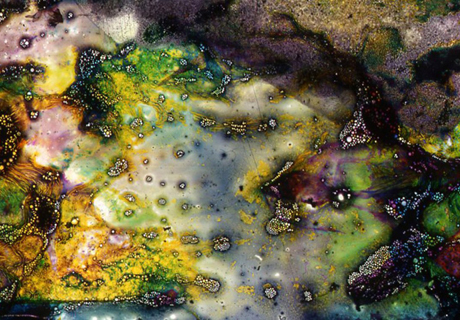 Expanded cinema artist Hangjun Lee and Balloon and Needle noise turntablist Chulki Hong create a brutal state of ruptured perceptions and frenzied cacophony. Though their work is intended as live celluloid and instrumentation interventions, the duo previously released the self published DVD Expanded Celluloid, Extended Phonograph, which shows some of their work transposed to a single channel presentation. Their work strips cinema back to it’s primal forces – projection beam, frames, colour, and reconfigures it into an abstract discharge which the sound, played live from an ensemble of turntables and effects, mirrors in it’s harsh intent. Nebula Rising uses decayed and handmade 35mm film in duo with a blasting noise-track. 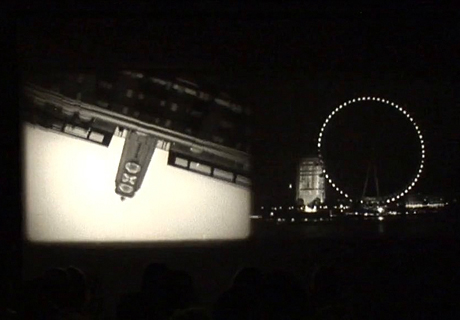 Double screen 16mm film projections of five films constructed in the form of the palindrome; a sequence of elements which appear the same when perceived both forwards and backwards. The films are edited through a process both of chance as well as precise measurement of frames. Made with ostensibly useless materials; paper cut-outs, artificial hair, discarded negatives, old newspapers and found footage – by using cheap materials and 16mm technology – the films exist on the periphery as handmade, living objects. Originally intended for live 16mm film projection with the slippage of frame sync and live mixing of optical and pre-recorded sound. 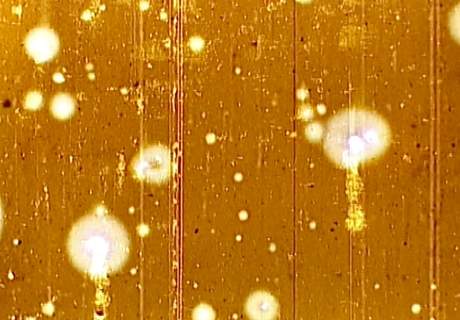 Ben Gwilliam is an artist whose work spans sound, film, installation & performance. Oxide is the digital transfer of Super8 and 16mm films that have been subjected to rust growth pre- and post- photochemical processing, with subsequent magnetised rusting recorded to tape using various sizes of tape head. The version presented here is a single-screen, digital iteration of the film performance Oxide (ii) + (iii) which was developed during an embedded residency with Sound and Music and no.w.here, London, in 2011. Beyond making Oxide (ii) + (iii), the moment of projection has passed from the live and temporary into the static and non- representative medium of DVD. Akin to compiling a live concert recording as a studio release, it inverts the process of self-mechanisation by no longer being a film work that follows the linear sequence of capture–develop–synchronise–project. Oxide is released on DVD by the Entr’acte label. 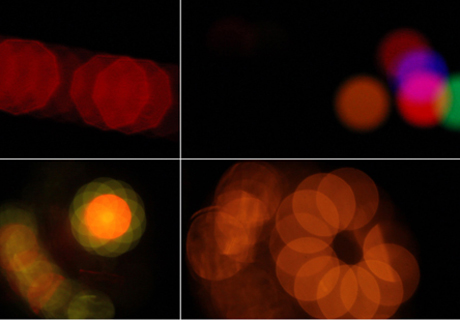 A document of energy forms in states of vibrating transmutation, this audiovisual composition uses LEDs, strobes and torches to create a mechanical ‘light-score’. Sound artist and composer Joel Stern orchestrates toy lights to sonic effect by bringing in close proximity light sensitive mini synthesisers and oscillators which wildly object and protest to the candescence emitted by this discount store detritus. Animator and filmmaker Pia Borg guides a video camera with a careful eye picking up the subtleties created through lens refraction and colour play, seeking a cosmic resolution to the chaos of light and sound. Stern, who is in an indefatigable array of Australian bands, and Borg who is an award winning short filmmaker, coalesce in a shared and intensified abstract moment. 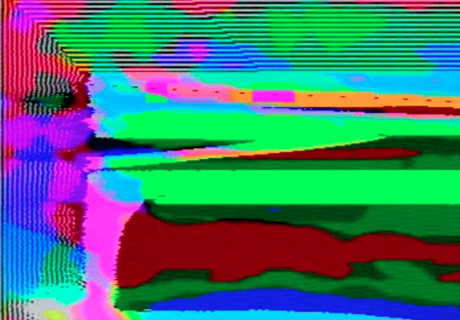 Part pulp, part hauntological ghost glitch – this is the documented results of Botborg’s researches into the ‘occult’ science of Photosonicneurokineasthography (psnky). “Literally, psnky means ‘writing the movement of nerves through use of sound and light’ and was first developed by Dr Arkady Botborger (1923-81) in the mid 1960s.” Part of Botborg’s work concerns the induction of new mental states by the means of repeated exposure to machine-aided synaesthetic media whereby light and sound are forced into a self-feeding interaction. Through transformative processes in which light becomes sound, and vice versa, the viewer is forced to perceive Botborg as a single signal rather than as separate audio and video streams. 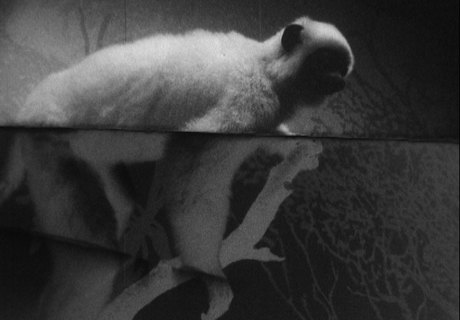 16mm B&W film screened on digital; Sound; 7mins; 2012
“A distinguished flea hypnotizes the ghost of a distinguished man” is the jumping off point for this terse Burroughs style gothic cut up. Part flicker film, part regression therapy tape, this experimental short film invites the viewer into an otherworldly vortex involving invocations of Freud and Mesmer in “a very special séance”. Since 2010 Dornieden and Gonzales have been working together under the moniker OJOBOCA. Together they practice Horrorism, a simulated method of inner and outer transformation. Their work encompasses films, performances, installations and workshops. 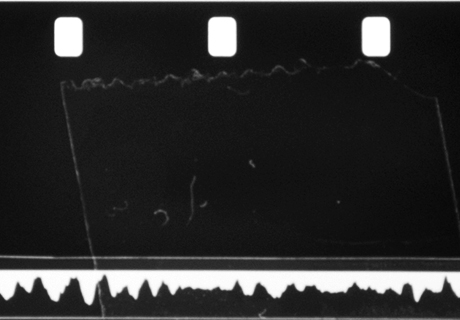 Sound recordings ripped from a flexi disc containing a dialogue about past life regression, and vinyl library sound effects, were reformatted as optical sound waveforms by recording into a 16mm sound camera, hand processing the film, and contact printing the resulting waveforms into a ‘darkroom composition’. Sounds surface and regress, male voices ‘authorise’ and female voices ‘characterise’, as an uncannily obscured field of light and dark unfolds on screen. The flickering film frames compel the viewer to hallucinate a non-existent visual subtext complemented by the alternating in/audibility. Indicated in the repetition of the sound sample, ‘To find a memory in the vastness of time…’ Originally an expanded cinema performance with two 16mm film projectors, a laboratory strobe light and a rotating colour shutter, G-L+S has also been released on vinyl by the label Psyché Tropes. 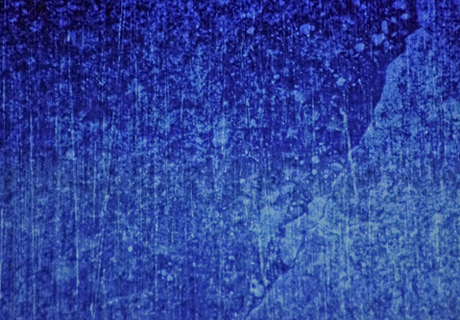 Makino Takashi’s immersive live media experiences are a transcendence into ‘physical unconsciousness’. Hallucinatory and experiential, Makino creates abstract cinematic worlds immersing the viewer like a grain of emulsion free falling in the corporeality of image forming materials. 2012 is Makino’s first film in which he combines images and sounds made by himself – a departure from his high profile live collaborations with sound artists and musicians including Jim O’Rourke, Floris Vanhoof and Lawrence English. 2012 combines digital and celluloid film in a 3D experience complete with a pirate patch polarising filter distributed to each audience member. An immersive, cosmic and organic work transcending textures and time.